AMD has announced that AMD Ryzen 9 3950X has been delayed until November 2019. This CPU was meant to come out later this month, however, it’s now planned for a November release alongside the new Threadripper.

AMD stated that it is currently focusing on meeting the strong demand for its 3rd generation AMD Ryzen processors. As such, the new Ryzen 9 3950X CPU will now release on November 2019. 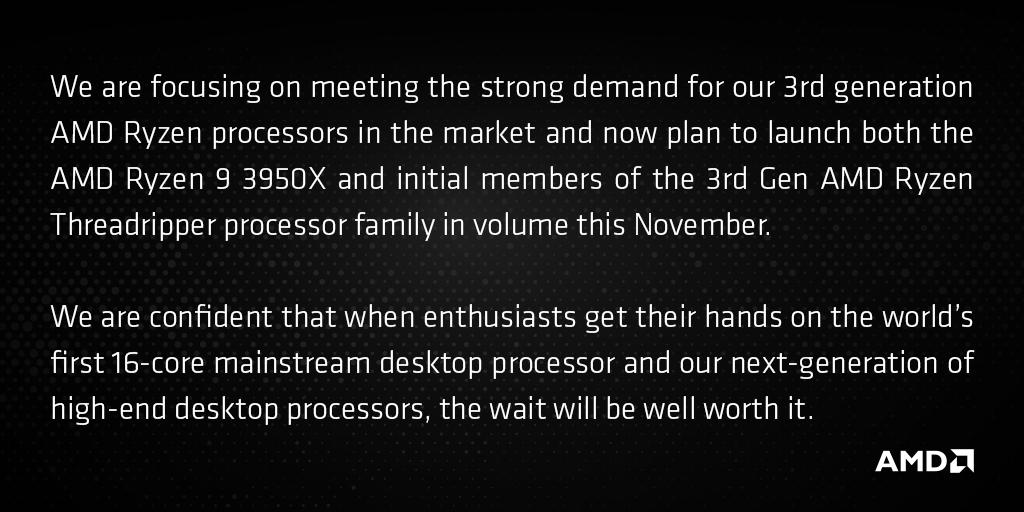 Truth be told, the availability of the high-end AMD Ryzen CPU models is awful at this point. As we’ve said numerous times, we were planning to build an AMD Ryzen 9 3900X system. However, we could not get our hands on this CPU here in Greece. Not only that, but AMD’s official Amazon page had an ETA of three months for this particular CPU. On top of that, the prices for those CPUs have skyrocketed, surpassing the official MSRP.

Here is hoping that the red team will be able to overcome these issues before launching the new AMD Ryzen 9 3950X. This CPU features 16 CPU cores, and – to be honest – does not really target PC gamers. Yes, the company may claim that this processor will be great for gaming, but let’s be realistic here; there aren’t a lot of games that can take advantage of 8 CPU threads, let alone 24.