During the latest earnings call for the second quarter of 2020, AMD has once again reaffirmed its plans to introduce Zen 3-based Ryzen 4000 client Desktop CPUs and RDNA 2-based ‘Navi 2X’ GPUs in the second half of 2020. This means Zen 3 and Navi 2x product lineup from AMD is on track.

“We are on track to deliver strong growth in the second half of the year, driven by our current product portfolio and initial shipments of our next-generation Zen 3 CPUs and RDNA 2 GPUs that are on track to launch in late 2020.” –AMD CEO Dr. Lisa Su.

Last week in a statement posted on the AMD Corporate Blog, Rick Bergman also confirmed that AMD will continue its high-performance journey with Zen 3 client processors, and that we haven’t seen the best of them yet.

“So, what’s next for AMD in the PC space? Well, I cannot share too much, but I can say our high-performance journey continues with our first “Zen 3” Client processor on-track to launch later this year. I will wrap by saying you haven’t seen the best of us yet…” –Rick Bergman Executive Vice President of Computing & Graphics at AM.

Earlier this month, Lisa Su also assured that Zen 3 CPUs are running in their test labs, and the CPU architecture is looking promising. Lisa Su also referred RDNA 2 as the Big Navi, which means we can expect enthusiast-grade GPUs first before the mainstream stack. AMD’s CEO also stated that RDNA 2 isn’t just aimed for the high-end market segment, but instead would be a full refresh from the top to bottom of the GPU stack. AMD will target the enthusiast segment first, and will introduce mainstream products later on, within the first half of 2021. The RDNA 2 graphics architecture will eventually refresh AMD’s entire Radeon product lineup of GPUs.

“We are on track to launch RDNA 2 or as you call it Big Navi late this year. We are excited about the RDNA 2 architecture. It’s a full refresh from top of the stack to the rest of the stack”- AMD CEO – Dr. Lisa Su.

Lastly, David Kumar, CFO of AMD, also reiterated that the RDNA 2 architecture will go through the entire stack which means that we can expect high-end enthusiast and mainstream products at a much affordable price point.

“There’s a lot of excitement for Navi 2 (RDNA 2), or what our fans have dubbed as the Big Navi“

“Big Navi is a halo product”, “Enthusiasts love to buy the best, and we are certainly working on giving them the best”. “RDNA 2 architecture goes through the entire stack“. It will go from mainstream GPUs all the way up to the enthusiasts and then the architecture also goes into the game console products… as well as our integrated APU products.”This allows us to leverage the larger ecosystem, accelerate the development of exciting features like ray tracing and more.” – AMD CFO David Kumar.

AMD’s roadmap also confirms that RDNA 3, CDNA 2, and Zen 4 are expected to launch within the next 2 years. CEO Dr Lisa Su has reiterated that the Zen 4 microarchitecture is “in the lab and looking good”, and it is going to be built on the 5 nm fabrication process node.

The company has already started shipping semi-custom SoCs to both Microsoft and Sony, for their next-generation Xbox Series X and PlayStation 5 game consoles in volumes for this Holiday season. Semi-custom shipments could actually contribute big to the company’s Q3-2020 earnings. CDNA2 will debut next year. 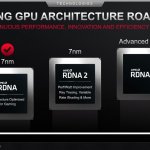 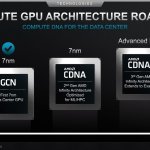 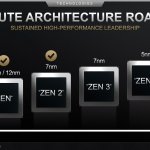