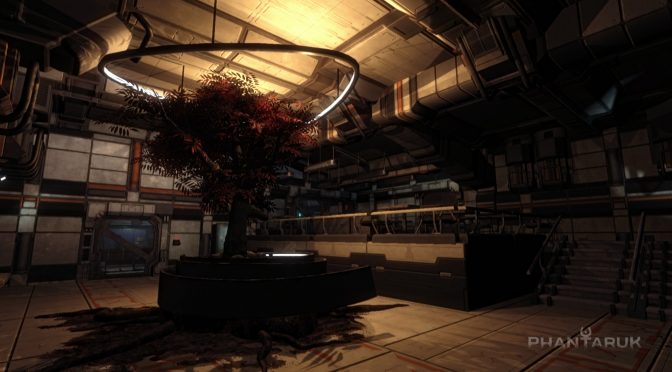 Phantaruk is a new game that combines survival horror with adventure and stealth mechanics. Polyslash has provided us with a key for it, and below you can read our first impressions of it, accompanied by a 10-minute playthrough that shows off its first mission.

Let’s start with our biggest gripe; the game suffers from ridiculous mouse acceleration issues. In fact, this issue can literally destroy your whole gaming experience (and I’m not exaggerating here) as the mouse movement feels so awkward and… awful.

Phantaruk seems to be inspired by other horror games like Amnesia. Players are being hunted by a monster and you’ll have to hide in the shadows in order to avoid it whenever you encounter it. After all, the player does not carry any weapon to defend himself/herself.

In Phantaruk, players will have to solve some puzzles in order to progress, and learn the events that occurred in the Purity-02 spaceship (via audio and message logs).

It’s worth noting that players will have to also collect batteries (for their flashlight) as well as doses of antidote (as you are infected with a parasite that emits deadly toxins).

Apart from the game’s awful mouse acceleration issues, we found Phantaruk pretty cool. The game is powered by the Unity Engine and offers nice visuals, though it is plagued by some performance issues. Although we were able to push a constant 60fps experience (when we were not recording footage) at 1080p on Max settings, there were scenes during which both our GPU and CPU were underused.

Phantaruk intrigued us, and we are almost certain that horror fans will find Phantaruk interesting, despite its current flaws. Let’s hope that Polyslash will release a patch in order to fix the game’s mouse acceleration issues.

The game is priced at 11,99€ on Steam (a pretty reasonable price if you ask us).