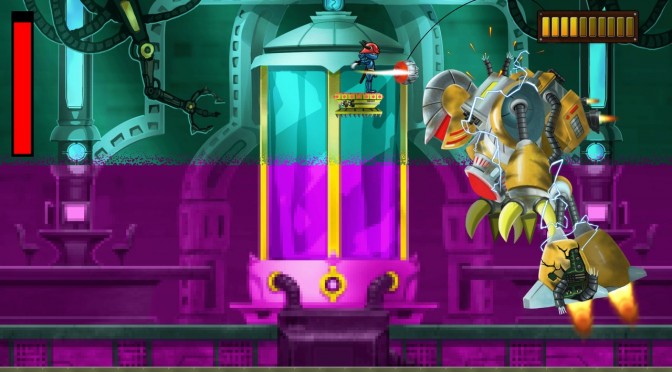 Beefjack was kind enought to provide us with a copy of Concursion; Puuba’s new title that combines lots of different genres into one game. Concursion mixes together the worlds of platformer, shooter, hack-n-slash, jetpack and maze racer/ puzzlers as players pull off feats of tight aerial acrobatics, run, jump, fly, fight and occasionally dance through the kingdom on their quest to put a stop to Bigunbad (the bad guy of the game that has kidnapped a princess).

Concursion is basically Super Mario meets Ninja Gaiden meets Pacman meets R-Type meets Joyride (NES version). Yes, the concept sounds wonderful. This is basically a tribute to Nintendo’s games, something that most old-school gamers will appreciate. And while Concursion is cute and interesting, it does suffer from various shortcomings.

For starters, the Super Mario-like mode feels sped up, especially while jumping. As a result of that, your jumps won’t be 100% precise most of the times, something that is crucial in such titles. Not only that, but the camera – most of the times – is really up close to the player, thus limiting your viewpoint while trying to reach specific areas. Controls also feel a bit weird and loose.

Moving on to the R-Type-like mode, this particular one feels underwhelming as the weapons are not powerful enough. The best thing in this type of games is when the player finds powerups to boost/enhance his/her weaponry. Unfortunately, Concursion’s shooter sections lack such a feature, resulting in somehow boring combats.

And to be honest, these are our biggest gripes with Concursion. The maze-like and jetpack-like modes are quite good – although a bit simple – and the Ninja Gaiden-like mode is by far the best one featured in it (hell, there is even a double jump. Awesome).

Puuba has managed to mix these styles together in a game that packs cute 2D visuals. Since this is an indie title, there is no reason to expect mind-blowing particles effects and complex DX11 techniques. And despite these technical limitations, Concursion has stylish visuals that will make you smile. And we do have to note that at times, Concursion feels like a browser game, something that will definitely put off a lot of gamers.

For what is worth, we found Concursion interesting yet flawed. Its concept sounds great, its portal methodology of blending different genres in one stage is a brilliant idea, but there is something that put us off. Perhaps the problem here is that Concursion tries really hard to blend together different genres, yet fails to truly excel in each one of them. The game releases today and will be priced at $11.99 on Steam.