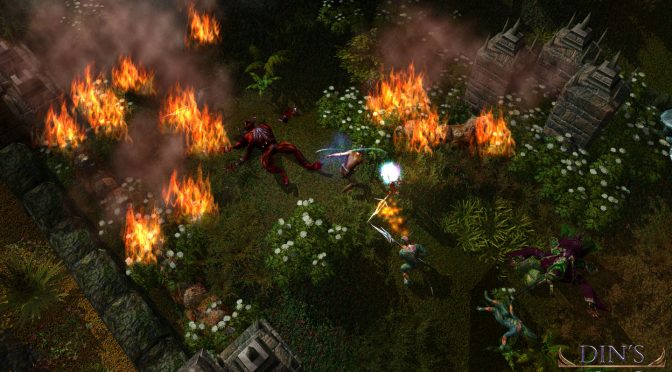 Din’s Legacy is an action RPG with mutating characters, set in a dynamic, evolving, fantasy world. This new action RPG leaves Early Access on August 26th, and Soldak Entertainment has provided us with a review code. As such, below you can find a video showing 9 minutes of gameplay footage.

Unfortunately, it appears that Din’s Legacy does not feature any story-driven mode. When launching the game, players are prompt to create a new world that they can explore.

The key feature of Din’s Legacy is a mutating system which allows players to experience their character mutating over time. Players can guide their character’s evolution (choosing/improving skills, suppressing unwanted mutations, etc). Moreover, they can use mutation points to mutate their character towards another character or sub-class.

It’s a cool concept that, however, targets only a specific number of gamers. Furthermore, the game currently suffers from some optimization issues. There were instances in 4K (and on Max settings) that the game was dropping below 60fps on our NVIDIA GeForce RTX2080Ti. As you will see in the following video, however, both our CPU and GPU were not taxed at all. I seriously don’t know what is causing these framerate drops. Given the fact that the game does not look particularly impressive, this is something that Soldak needs to address as soon as possible.

Speaking of visuals, Din’s Legacy is serviceable. Unfortunately, there is nothing that will “wow” you, and the graphics look really old-gen-ish. Not only that, but the enemy hit reaction and animations are not that smooth. Since I recently played and finished Warhammer: Chaosbane, I can safely say that the latter performs and looks way better than the former. Now obviously Soldak is a smaller studio than Eko Software, however that’s another area that Din’s Legacy kind of let me down.

All in all, I wasn’t really impressed by Din’s Legacy. I’m certain that the game may appeal to a niche PC market, however its current tech state is awful. A game looking like Din’s Legacy should be running with more than 200fps in 4K, not dropping below 60fps. Furthermore, its world did not really excite me in order to explore it.

Here is hoping that Soldak Entertainment will at least address the game’s performance issues!