Amidst every blockbuster release each year, for some gamers, some titles just don’t stand up to the rest in terms of anticipation. This is maybe either due to a bad first impression from demos or due to the fact that they might be sequels to games that were disappointing. However, some of these games outperform their expectations and are ultimately a finer part of gaming. This personal list is a pick of those games which I believe were not only better than expected but also better than most games that year. Also do note that, these are not in any significant order and are only those that were available on all three major platforms which includes the PS3, PC and Xbox 360.

When Binary Domain was first unveiled, most people including me thought it to be a bro-punching mainstream shooter. The generic looking box art and the repetitive gameplay further affirmed that belief. Furthermore, it was released on the consoles first and the fate of the PC version was left merely to speculation. So what is it that worked in this game? 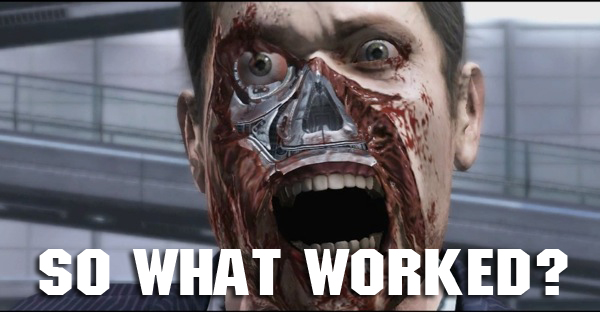 The game had one thing always going for it, The Story Development. What were once looking like generic characters and confusing plot-lines, over the time turned out to be pretty engaging and adaptive. In fact, even the teammate’s impression of you changed according to how you played. The speech function on PC was a nice addition to the game as it allowed you to easily issue commands, and either commend or scold your teammates according to their actions. Furthermore, the development of the story was brisk, understandable and the story had this unique charm which can only be felt from games made in Japan. Lastly, the gameplay although repetitive at times was actually satisfying due to the breaking limbs and shattering parts of the robots following an intense gunfight. The boss battles were also hectic and fun.

I have to admit, I enjoyed the first Prototype and it was fun… for a while. Its repetitive gameplay made finishing the game a chore for not only me but many others. It was only for a while that the cool powers would grab your attention and then it would let you go after a while due to boredom. So when the sequel was announced, I wasn’t anticipating much and was almost about to pass it but thankfully I didn’t.

Because, the moment the game started and I controlled Heller through the ruins of a once bustling city now fallen to disease and hostility. I could easily see where the huge Activision production values had gone: the game looked good, the set pieces were huge and the tutorial section was probably one of my favorite parts in this game. The way it was handled, and how it reverted to slow-mo when a new hint came on was really adrenaline pumping. The music too, was spot on for that particular scene. Lastly, the game was absolutely kickass due to the amount of powers and their customization and upgrade options. So unlike the first one, it rarely felt boring and was so fun that at times I would play it non-stop.

When I first saw the gameplay and developer interviews for this game, I got excited for it as it looked different than the regular ‘run of your mill’ shooters, but that excitement was short lived after it came out on consoles and many people didn’t like it. I probably wouldn’t have picked it up had its PC release date not saved it. You see, the game was released during the summer, a time where there is a drought in good games so I had nothing to play and thus, decided to pick this up.

For that, I am really glad because this game was exactly what I had hoped it to be and much more. It was a fun and engagingly made solid shooter that had some unique mechanics and ideas around it. Not only that, but the game had a great balance between performance and presentation. The game looked really stunning on PC in HD and ran better than its console counterpart. The pinnacle of this game, however, was the amazing and ambitious sci-fi story. By the end, the game had two amazingly good twists that took you by the gut. One was really emotional while the other one was really grand. The developers had the audacity to really fly with its story and the way they presented it, paid off.

I have to admit, after playing the first game I had neither hopes nor excitement for this game. It was to be a sure as heck a pass for me; but like Inversion, the release date was in summer and due to my love for all things transformers, I picked it up.

This was probably my biggest surprise last year and after playing the game, I have to say that this is the best Transformers game I have ever played. The combination of an amazing story, huge levels and the breathtaking music really won me over. Furthermore, unlike the prequel, I felt myself really immersed in the game; I felt like I was actually a part of something important and defining in the Transformers timeline. The Grimlock section was probably my favorite and the way they switched between characters, especially by the end was exceptionally well done. In fact, the character changes were so well timed during the mind-blowing climax, that it felt really exciting and adrenaline pumping. This was the time when the game was saying, “This is it, this is the most iconic battle for the Autobots and Decepticons, and you will play a huge part in it.”

Right off the bat, I knew this game was going to be fun and engaging. And contrary to a lot of people, I really loved the second part of this franchise – due its realism in handling the gameplay mechanics. It did however have some problems, like long travelling and frustratingly infinite supply of enemies in game. As a result of that, some people were a bit skeptical about this third part, especially after the demo where they showed Jason escaping from a burning mansion and thus people thinking that it would be scripted as hell.

Fortunately though, that never came true. Far Cry 3 was not scripted to death. In fact, the game took all those elements that made the second part great, and improved every single one of them. What was really surprising about this title was how open-ended the actual game was. Far Cry 3 had so much to do, and the hunting and safe house mechanics finally made sense in a videogames. They were also extremely hectic and engaging. So hectic in fact, that it got awesomely random at times. For example, picture this… “So there I was, about to attack a really toughly guarded safe house and I knew running in would be apparent suicide. Luckily for me though, amidst the large and bulky quantity of patrolling guards, I saw my answer to an easy takeover. An answer in form of wild rabid dogs trapped in a cage. So without further ado, I used my trusty and silent sniper rifle to unleash them on my enemies. However, it didn’t work as well as I had hoped, since the heavy had made a quick work out of them without any effort whatsoever and I was left there hopeless, feeling cheated. So I decided to take them out one by one, but before I could do that the game showed me mercy, they all started shouting and shooting at something. Which after awhile, turned out to be a grizzly bear. The guards put up a good fight with it but the bear tore through them like if they were sacks of cotton, Red and Liquorish one to be exact. After it was done with them, I rejoiced and took a sigh of relief – TOO DAMN EARLY! It charged towards me with blood in its eyes and I just stood there motionless, shooting at it. It didn’t help at all and I realized that I was done for… but then, out of nowhere popped a Jeep and hit it hard, killing it. It was my fellow tribesmen. I felt as if god had shown mercy on me, but even that was wishful thinking since death was written by a tiger due to my cockiness just down the road.” This is how awesome this game can get. Far Cry 3 is without a doubt, the most well received FPS of 2012; a game that reminds us why we adore the FPS gameplay at its finest form.