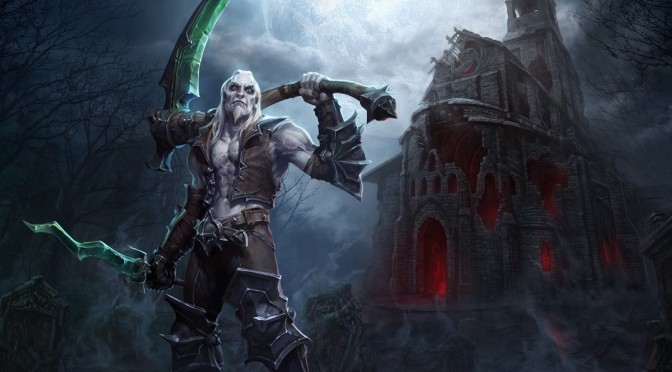 Xul is the new addition to Heroes of the Storm. He’s a melee specialist using his powers to control the undead to overwhelm his foes. The passive he has for raising skeletons from slaying enemy minions is effective at pushing lanes. Although it seems he is very niche of a pick against comps with fast attacking melee heroes. Mainly because as you’ll see from his kit he excels at being close to his target. It seems that if you choose a ranged assassin against Xul he will struggle to have much effect on the outcome of a battle. 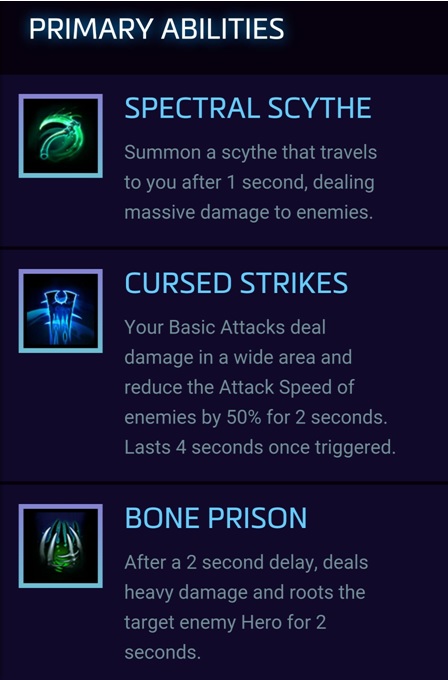 Spectral Scythe (Q) – This skill shot is easily dodged by an aware opponent. It should be used while chasing and causing the opposing Hero to change course giving an advantage to you or your team closing the gap to secure a kill or otherwise killing the enemy Hero. Other than that it’s a find lane pushing tool, but not as effective as the next skill.

Cursed Strikes (W) – I feel like this is arguably one of the best pushing tools to date on any hero. It causes slowed attacks and can effectively hit an entire way multiple times. Although you do put yourself at risk for a gank being in melee range. Thankfully your (1) ability causes you to have a shield to hopefully mitigate such a thing from killing you. Still safe pushing out there folks! Also, the attack speed slow on this ability is like the biggest middle finger to heroes like The Butcher and Illidan.

Bone Prison (E) – Not much really underlying here. It’s a good form of CC and almost always ends in a kill since your team can see the mark and the root lasts 2 seconds (I think this will be patched in some way). Highly effective against The Butcher and Illidan. 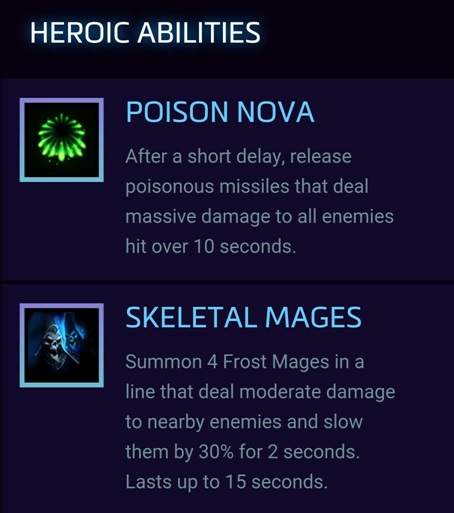 Poison Nova – If you find yourself in the middle of teamfights often and you have enough CC to keep the enemy under control you should think about picking this up. It has a high damage cap and more than likely will turn the fight if it hits 2 or more enemies (and it’s quite likely it will). The damage is enough to knock at least 2 out of the fight whether it be they run away or die.

Skeletal Mages – This ability is good at cutting off at choke points or keeping a pushing enemy close to towers by blocking their way and slowing them ensuring once the minions die they will take added damage from towers and allies. It creates a destructible wall of mages that chill the target slowing their movement speed. You have great varying options of how to control the enemy. So use this if you lack some necessary CC to stop enemies.

There are a number of people out there that think he is OP and are crying for nerf already. I think the reason people think he’s OP is because he’s new and people haven’t yet learned how to play around him. Although it wouldn’t surprise me if he did get nerfed because of community outcry. It’s also not surprising that his win rate is higher than expected because of those facts. I think he’s pretty balanced except for perhaps that targeted root. Li Ming made larger waves in the meta quicker than Xul has.

Xul may not be Li Ming OP, but he has some formidable tools at his disposal. His ability to push a wave is paralleled by maybe Zagara. And his abilities spell disaster for any squishy assassin that need to be in melee range. I wouldn’t buy him outright unless you had the gold. Personally I can’t justify using real money to buy him since his niche is not needed all the time and there are other heroes that can be closely effective as him in teamfights. I think overall he’s a fun pick and not much is seen how he will change the meta.