It looks like some details on AMD’s future upcoming Ryzen APUs have been leaked on the web by Expreview (coming via HXL). Rocking new Zen CPU architectures and Vega/RDNA designs, these APU families will be released for both the desktop and mobility platforms.

The current Renoir ‘Ryzen 4000’ APU family is based on the Zen 2 CPU and Vega GPU architectures. The CPU is fabbed on the 7nm process node.

Coming to this leak, first off, we have the Ryzen 5000 “Cezanne“ APU lineup which will be a direct successor to “Renoir”. These are rumored to be based on the ZEN 3 architecture, having VEGA GPU cores. These might target the high-end notebook (FP6), and mid-range desktop APU segment (AM4 socket).

The “Cezanne” family will be based on two segments, the high-performance Cezanne-H and the low-power Cezanne-U series. These processors will be based on the “FP6/AM4” package, BGA platform. The GPU powering the Cezanne APU is going to be an “enhanced” version of the existing Vega/GCN architecture silicon.  The Cezanne APUs will be fabbed on the TSMC’s N7 process node.  These are expected to hit the market by 2021.

Next up, we have the AMD Ryzen 6000 “Rembrandt” APUs which are going to be based on the refresh “Zen3+” design, and “RDNA2” graphics architecture.  According to this leak, Rembrandt is also expected to support DDR5 and LPDDR5 memory.  “Expreview” even mentions support for USB4, and PCIe Gen 4.0. The Rembrandt APUs are rumored to be fabricated on the TSMC “6nm” process node, which is an optimized version of the N7 process.

RDNA 2 GPUs featured on “Rembrandt” will offer increased performance per watt than current Vega offerings. For desktops, Rembrandt will most probably support the “AM5 socket platform”. Rembrandt family APUs are rumored to launch in 2022.

Lastly, we have “Van Gogh” which will be based on a custom “SoC” (system-on-a-chip)  for ultra low-power designs, 9W TDP designs for embedded systems and ultra-thin mobile devices. These are going to counter the Intel’s Y-series ultra-low-voltage processors. “Van Gogh” APUs are expected to rock Zen 2 CPU and RDNA 2 GPU cores respectively. These might land next year, 2021.

All in all, it looks like AMD has a strong “APU roadmap” plan laid out for both the desktop and mobility platforms for the future. According to the leaked chart, “Raphael” seems to be first socket “AM5” desktop platform, succeeding “Vermeer“, and “Rembrandt” is likely to be the first socket AM5 APU. 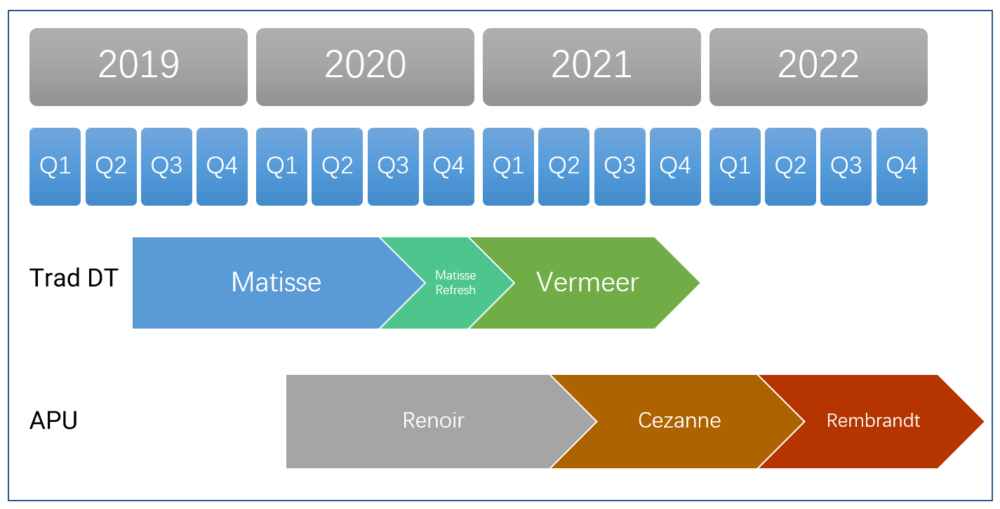