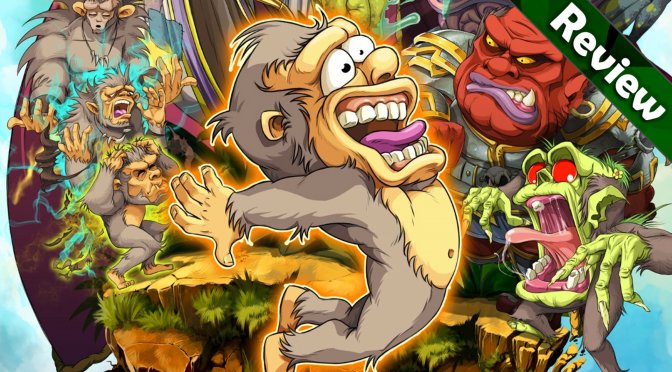 Once upon a time during the arcade golden era, numerous games were releasing at a constant pace, each one aiming to captivate young players with pockets full of coins. With so many games to choose from, companies had to distinguish themselves through the latest technologies, custom arcade cabinets, colorful creativity, and other innovative methods.

During this time of wonders, arcade and home console companies like Namco, Nintendo, and Sega fiercely fought to stay on the cutting edge of glory. It was during this time that a small company called TAD Corporation created a surprise hit platformer; a game called Toki.

Here’s a little history of the company. TAD Corporation started making games in 1988 and had immediate success with its arcade hit Cabal. This success allowed the next year’s release of Toki; a curious game and a bit different from the competition.

Toki was another sudden success thanks to smart design choices and over-the-top humor. It kept some of the clichés from that era (such as a damsel in distress and an evil wizard), but Toki subverted the concept of the hero. Usually you’d play as the super-muscular and attractive main character, but in Toki you played as Toki, the somewhat ugly protagonist.

The story goes that he was an unlucky Tarzan-like fellow that, while saving his beloved Wanda, was transformed into a hairy primate. He became a sort of antihero, and his new powers (shooting magical spheres from his mouth, obviously!) allowed him to go on a quest to save his love and do battle with the forces of evil, ultimately confronting the wily wizard.

Given the story context, the game was set in the winning choice of a colorful jungle rather than the common industrial or fantasy settings of the era. Hence, the characters contrasted wonderfully with the nicely detailed backgrounds of each stage, attracting the eyes of wandering arcade-goers.

The gameplay itself consists of basic platforming by today’s standards. Various jumping patterns and enemy movements can be learned as you go. There’s power-ups to improve Toki’s abilities, including new skills like fire shots and gear like an American football suit to protect him (quite humorous looking).

Even with all this creative and colorful design, the arcade version of Toki unfortunately didn’t become a household name. It was successful, meaning lots of players loved the game, but the Toki brand and mascot never hit the mainstream.

On a personal note living in Italy, the game was quite well known because it was available at so many beaches and camping sites, where all the old arcade games were sent (probably because they were cheaper to rent or buy than the fancy new cabinets).

Thankfully, though, Toki did find more notoriety upon entering people’s homes. Over the next few years after release, the game became available on numerous home systems and computers. Some compromises did have to be made on certain versions in order to make the game run on less powerful systems, creating various levels of quality.

For those who are old enough to remember, one of the biggest publishers and porting houses was a company called Ocean Software which, thanks to its French division, created the best ports of Toki for the two most powerful gaming consoles of that time: the Amiga and Atari ST. With these excellent versions, finally eager players could enjoy the game at home without the hassle of the coin-eating arcade life.

Despite the success of their first two games, in just 1993 TAD Corporation closed its doors, and Toki was relegated to the distant memories of many players, only occasionally being remembered through old cassettes, discs, and random beach bars and arcades.

Then, in 2009, something happened: for its 20th anniversary a team from France–including some of the original Ocean Software people who created the Amiga port–decided to remake the game for modern platforms, thanks to their in-depth knowledge gathered at the time of the original port. Unfortunately, for various budget or publishing reasons, the game never came out and, apart from a few discussions here and there and sparse news, the game seemed to be vaporware.

This finally brings us to the present, with another French company, Microids, announcing a full remake of the game would come out close to the game’s 30th anniversary. First released on the Nintendo Switch in 2018, finally Toki has made its glorious return in 2019 to various modern platforms, to the joy (and surprise) of many.

The remake process has been handled very faithfully by reconstructing from scratch all assets, including redrawing all characters with high-resolution cartoon imagery, while painting the backgrounds in a semi-watercolor style. There’s also a fully re-orchestrated soundtrack that works well to enhance the charming and zany humor of the game.

On the technical side, the game plays at a high framerate and is so much smoother than its old school roots. Apart from a few moments of lag (probably my PC’s fault), the game runs great. Other nice features include various video filters to recreate the old-fashioned monitors of our childhoods, a speedrun mode, and a jukebox option to listen to the tunes both old and new.

Being originally quite hard, this modern Toki also allows players to change the difficulty. If you’re like me–platformers aren’t my strong suit–you may have some problems finishing the game even on the lowest difficulty because of tricky platforming and placement of many enemies in some stages.

In conclusion, even if it is a simple game–easy to describe and hard to master–thirty years on Toki remains a work of art thanks to the loving of remake treatment it has received, giving new life to this great old game. We’ve seen this done in recent years with other games like Wonder Boy, and hopefully the trend of quality modernizations of classic games at a budget price will continue.

As a reviewer, it’s hard to review Toki simply because it feels out of time, coming from another age. However, I really hope you’ll love Toki as much as I have loved it. If you’re looking for a fun lower-priced game to play with old school platforming and timeless charm, this new Toki is likely for you.

Playtime: 10 hours total (and counting). Mathieu has not completed the game, but he’s still playing it (and dying lots of times!).