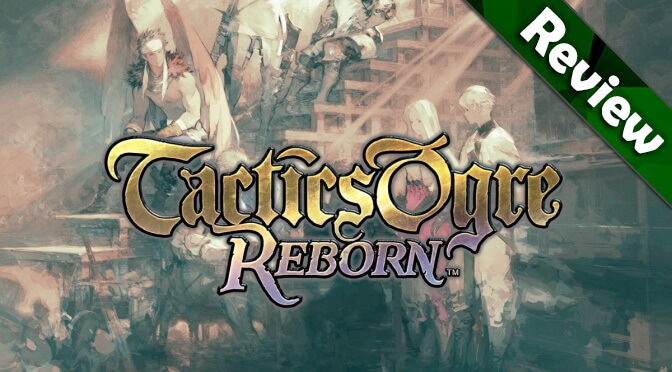 Have you ever adored a game but knew you couldn’t recommend it to most people? That is Tactics Ogre: Reborn. I’m brokenhearted because the game is near perfection from a narrative perspective. The story is timeless, the dialogue is sharp, and the voice work is excellent. However, the weighty tale is dragged to the depths by clunky controls, artificial difficulty, and incredibly tedious gameplay.

Before saying more, some backstory is in order. Tactics Ogre was released in Japan for the Super Famicom in 1995, and the first English release was the 1998 PSX port. A significant PSP remaster arrived in 2011 called Tactics Ogre: Let Us Cling Together. Now, 27 years after the original, we have Tactics Ogre: Reborn. It is essentially an update to a remaster of a port of a SNES title.

Why so much fuss over such an old game? The answer has to do with its visionary designer, Yasumi Matsuno. He has become a mythical JRPG figure, delivering signature dark narratives in compelling worlds. Consider some of his remarkable games: Ogre Battle, Final Fantasy Tactics, Vagrant Story, and Final Fantasy XII. Despite his two Final Fantasy games garnering much more popularity, Tactics Ogre is arguably his finest work. Thus, Tactics Ogre: Reborn is a big deal for those in the know.

Reborn is gripping from the start, even though the low-fidelity, blurred pixel art betrays its mid-1990s roots. The art may be old, but the narrative is as relevant as ever. Explore bigotry, ethnic cleansing, and righteous anger turned to vicious wrath. Witness love and war, mistaken identities, and misplaced loyalties. Mature are the themes of Reborn, and deep and complex are the characters.

Hand in hand with the powerful story are intricate army management systems. Building your characters is addicting: change classes, optimize your equipment, and select skills. Deciding between generic characters or special story units is always a tough choice. When ready, unleash your forces on hundreds of isometric, tactical battlefields. Extra credit for those who have the patience to tame and train monsters to complement battle strategies.

Truly, Reborn is a game you can get lost in for hundreds of hours, especially with the branching story choices that play out in three distinct ‘alignment’ paths. Once you finish the main story, a ‘World’ menu lets you go back to key points in the narrative to explore other story routes. You can rewind turns mid-battle through the ‘Chariot’ turn list, saving yourself hours of replaying entire missions. Both systems are fantastic, although they were present in the 2011 PSP version.

The best addition for this 2022 release is voice acting, and Reborn delivers terrific performances for nearly all characters. Never has it been easier to become immersed in the complex machinations of so many factions. Increased resolution for UI art and dialogue fonts is welcome. Improved menus are a boon, and streamlined crafting is also a solid improvement. Permadeath isn’t as harsh: your units now have three turns to be revived before they die and are deleted forever.

What isn’t so positive is the implementation of an army-wide level cap that slowly increases as you play through the story. While interesting in theory, the system ensures you are always under-leveled for major story battles. You could grind higher levels in prior releases if you wanted, but no longer. Maybe such a handicap enhances the idea of roleplaying a scrappy band of rebels, but it’s a shame that Reborn never lets the player feel powerful.

The new level cap can be very frustrating for people who aren’t so great at the genre. Why not let players over-level the content if they want to invest the time? Likewise, why not allow an Easy mode? Surely it would be a boon to many players, including those who have beaten the prior PSP version and wish to enjoy the story.

There are two other dubious changes. New buff cards randomly spawn on every map. Collecting these cards is crucial to victory in the hardest stages, but enemies can also acquire them. The most challenging bosses start with a full deck of four cards, which is just plain obnoxious. You are also at the whim of random activation for many essential battle skills. Not cool.

Likewise, random battles have been removed. Replacing them are town training stages, but those battles are both dull and mandatory, given the game’s often extreme difficulty. This difficulty level feels artificially imposed. Combine the level cap you constantly bump into with the random chance of buff cards and auto-skill usage. Forcing you down such a tightly controlled but randomized experience is very frustrating. Speaking of which…

This Just In: Tedium Kills

Monotony is a surefire way to make a player’s desire to engage with a great story flicker and fade. Such is the fatal flaw of Tactics Ogre: Reborn. It’s simply far too much of a slog. Maybe the gameplay was novel in 1995. Even in 2011, the PSP version’s innovative features led me to put in 200+ hours over several years. But in 2022, Reborn is far too tiresome in the actual playing experience. For instance, why can’t I turn off abilities in battle? Where is the option for instant moving?

Reborn features a ‘fast’ speed toggle, but 2x is still too slow when you have a dozen friendly and a dozen enemy units in play. To remedy the tedium, we PC players have the massive advantage known as Cheat Engine. I employed the Speedhack functionality constantly while playing Reborn, and I set the game speed to 20x for the repetitious chores known as training missions. At 20x, each mission finishes in about 1 minute with full auto AI.

When not training, the game clips along remarkably well at roughly a 2x Speedhack on top of the built-in ‘fast’ mode (effectively close to 4x). Thus, the developers need to patch in a 4x mode, especially considering Matsuno’s most recently remastered game, Final Fantasy XII: Zodiac Age, had both 2x and 4x speed toggles.

Maybe I’m too old now and value my time more than when I was a single young man. Perhaps you won’t mind the slower pace. As it stands, in 2022, the tedium is too much. As a passionate fan, I can deal with it (thanks to Cheat Engine). As a reviewer, I can’t overlook the drudgery.

A note on the graphics. The sprites and backgrounds are the original SNES art, which is good and bad. It’s good to know the art isn’t ruined, like other Square releases. It’s bad because the graphics are very low resolution. The disparity between the high-res UI in this 2022 release compared to the realistic portraits from 2011 and the comically cartoonish sprite characters from 1995 is highly unfortunate. For $50 USD, Square should have unified the art styles and brought the whole package up to modern standards for the sake of greater immersion.

Audio and music are both standout features. New audio effects and character sounds are solid and impactful. An orchestra has re-recorded the songs, creating a tremendously powerful feel. The Ogre series has always had incredible music, and this Reborn re-orchestration is a huge win. As noted, the voice acting is excellent, and you can choose between English and Japanese voices, which is nice.

Reborn’s PC port is very solid. Considering this is a SNES game ported to PSP and then ported to PC, the game runs very well on modest PCs. It’s locked to 60 FPS but runs fine on high refresh rate displays. The game’s internal maximum rendering resolution is 1080p, but it upscales without issue on my 1440p monitor. The keyboard and mouse controls work decently, but the developers didn’t build in real keyboard shortcuts for things like ‘End Turn.’ A controller is certainly recommended.

For completionists, Reborn is a dream and nightmare. The main story takes perhaps 60 hours (less for me using Cheat Engine’s Speedhack). Then you can go back to anchor points in the narrative and play through the other main story paths based on different choices. Every possible battle, item, and event is tracked in a menu. To achieve 100%, be prepared to spend ages playing (and hours reading external guides). As someone who’s ‘been there, done that’ on the PSP version, I can confidently say that this game can consume your life for months and years.

Despite my frustration at the tedium and lack of positive modernization, my heart is forever intertwined with Tactics Ogre: Reborn. Part of it is my nostalgia. Part of it is my passion for well-written, mature stories, especially those told by Yasumi Matsuno. Plus, there are very few high-quality tactical RPGs. Thus, Reborn will always be special to me, and I’m delighted that so many new people can now experience such a brilliant game.

Yet, I cannot recommend Reborn to most players. It’s like Leo Tolstoy’s 1,200+ page novel, War and Peace. Both are classics with tremendous depth (and similar narrative themes), but both almost require a support group to motivate you to begin and keep going. For Reborn, diehard fans will gladly endure the tactical trudge. For most folk, this is a title best left on the shelf of history. Still, the world is better for having Tactics Ogre: Reborn within reach, and nothing can ever change its pivotal role in tactical RPG history.