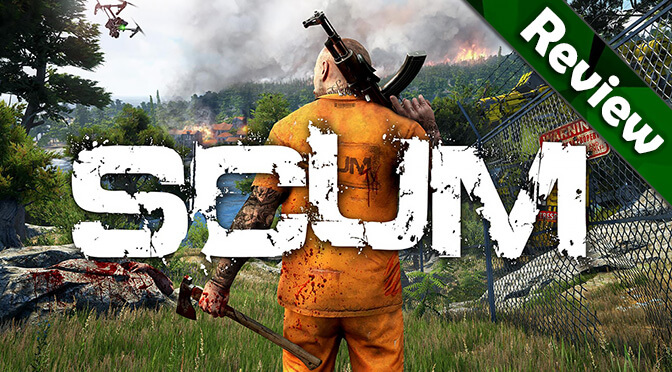 Welcome to SCUM! The hit reality television show brought to you by entertainment mogul TEC1! The show that quenches the peoples unending and insatiable thirst for blood sport! After a successful airing of its first season, TEC1 will expand its play field to a massive 144 sq. km open world. How the prisoners utilize this new space for season two is up to them. Will they work together, forming functional alliances for the benefit of all involved? Or will they actively sabotage one another, creating a more chaotic atmosphere for our viewing pleasure??

The latest to throw its hat into the ring in a well populated arena of open world survival games, SCUM sets itself as a live action reality show in which prisoners are pitted against an open world environment full of hazards, forced to fight for their own survival. While it brings many familiar mechanics that we’ve become accustomed to seeing in such a game, it also has some new and refreshing surprises that helps to separate it from the others.

Being an early access title it’s important to note that many of the planned features are not yet in the game, but from the start the developer’s ambitions are clear. The character customization, although limited in scope currently as far as appearances are concerned, has some neat RPG-like options available. You can modify your characters strength, constitution, dexterity and intelligence based on how thin, strong or fat you make him. Female prisoners are not available yet, but are supposed to come in a later update.

Each body type will play different, and an age slider will give additional modifiers to those base attributes. For instance, a man in his early 30’s will be more at his physical peak than in his early 20’s, whereas a man of 50 years may be lacking in strength, but his experience makes him wiser. The resulting attributes will determine how many points you have available to distribute between the initial skills, such as melee weapons, rifles, handguns, survival, stealth and more.

After creating and naming the prisoner players will enter at a random spawn point on the map, and be let loose to do as they wish. When I finally located the small blue arrow on the map that was my prisoner, I chose a location to explore and started running toward it. This was my first realization of how large this map is, and it is painfully slow-going to navigate. Imagine my disappointment when I learned there aren’t any vehicles yet.

First priorities for the prisoner may vary based on what the players goal is, and depending on whether multiplayer or single player experience. In single player, the enemies come as zombie-like creatures known as puppets, and large mechs that patrol certain areas.

On my first attempts through single player I got my butt handed to me. I was hungry, tired, cold, attracting puppets and getting injured left and right. Before long that feeling of weakness and despair is lessened, and the difficulty fades. The single player experience quickly becomes an easy one with little else to do.

Scavenging locations can become a nuisance, as most of them blend together without any real variety in interiors and décor, or even loot. After learning the patterns and predictability of the puppets, they become more of a slight inconvenience than a challenge.

The mechs, although deadly, are also predictable in their actions and movements, and as such are easy to avoid. The crafting system for now is very limited and doesn’t provide any options for fortifications, or give the player any reason to stay put. Although, these are promised features to come.

With weapons and ammo hard enough to find, I discovered that all I really needed were rocks and sticks to survive. The rest is just a constant scavenge for food and running between locations. With no real objectives yet other than survival, the only thing to do in single player is explore, and some may be happy enough doing just that. Although most the map can seem repetitive, there are still some unique locations to scout for.

Most players will find their fun in the multiplayer, where up to 64 player servers provide the human element that helps to switch things up and keep it interesting. As with most games of this nature, it can be a thrill knowing that at any moment you could be picked off at a distance by some encamped sniper looking out over the town.

This is when I had to exchange the sticks and rocks for guns and ammo. While the AI on the puppets and mechs may be predictable, human players are of course not. For what is available so far the guns do feel good. The reloading, recoil, firing animations and sounds all do well and give a good feeling of impact.

The multiplayer is where the longevity of individual characters comes in, and surviving for as long as possible feels better here for a few reasons. The first of which is the fame points system, which does exist in single player but seems more rewarding online. Everything your prisoner does gets him fame points, some actions more than others. Fame serves little functional purpose for now other than spending those points upon death to control which sector you’ll re-spawn in. But also bragging rights because it’s the direct testimony of the players survivability and skill in the game.

Long term survival is where one of the games more uniquely impressive systems is very noticeable, the metabolism. Under this tab players will find a wide array of stats to keep track of like how many teeth you’ve got left, heart rate, nutritional intake, calories burned, muscle mass, or if a bathroom break is needed.

If you want your prisoner performing at peak performance and to have maximum energy, he needs to watch what he’s eating! It would take me a while to list out everything to look for under this metabolism tab to explain how cool it is, so take a closer look at the provided screenshot to see everything that’s being measured. It’s crazy!

The performance of the game is still questionable, and being in early access it is expected that it hasn’t been fully optimized. On the first play it was terrible, I had to reduce nearly every setting and still didn’t see much of an improvement. After a couple of patches, it was significantly better for me and I didn’t see as many stutters and frame drops. My frame rates ranged anywhere from 50 to 130 with no way to lock fps in-game.

Much to my surprise, I didn’t experience any bugs. I’m sure plenty of players have encountered them, but I didn’t have any issues except for a temporary complete freeze-up that I thought to be a crash before it recovered itself.

Being an early access release will leave many potential buyers leery of purchasing just yet, and rightfully so. We’ve seen our share of flops, and it’s sometimes a safer bet to sit back and see if the developers are continually working on it and pushing updates. SCUM is no exception, but I will admit it does play well for being in such an early state.

The crafting system and combat are bare bones, there isn’t a whole lot of content yet, and character customization is limited. For those who enjoy the similar style it shares with other survival games, it is likely they will enjoy SCUM. It does look to be a promising game should the development road map be followed, so we’ll have to keep our eyes on it and see what comes!