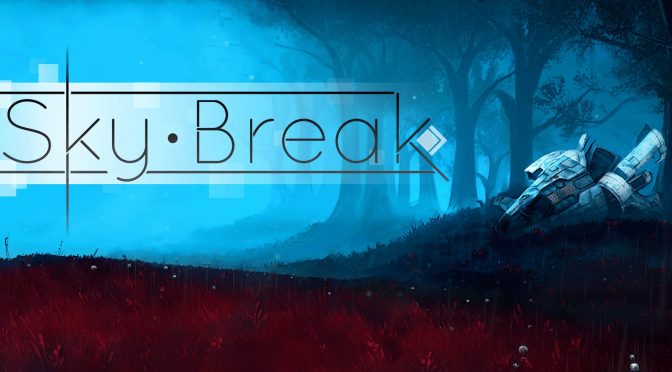 Sky Break will not rock your world, nor will it test your skills and (w)rack your brain. It’s one of those pleasant, casual, carefree action games which, were it not for the unique sight of peaceful, grazing herds of mech-ostriches, would offer a more forgettable experience.

We might as well get rid of the Horizon: Zero Dawn and the whole ‘mechanimals in a natural environment’ thing from the beginning. Are we doing the ‘PCMR vs peasant’ thing and belittling other games? Nope. Is Sky Break the ‘poor man’s Horizon: Zero Dawn?’ I am not even going to bother with such comparisons. The point here is that the setting of a mechanimal-infested world is not that common. Actually, it’s surprisingly rare. And we are not talking about a huge dinorobot as an end-level boss or an extra-terrestrial machine assuming the disguise of a robodog. This is the case of an entire ecosystem of neutral robofauna that inhabits a complete biotope. The aesthetic of robotic wildlife is intriguing to the eye and we haven’t had many chances to experience such an environment. As a matter of fact, I struggle to think of even one and can only recall those weird animals on the cover of Shadow of the Beast. So, until (if) Horizon: Zero Dawn gets a decent port, the only way you can experience this setting on your PC is through Sky Break.

Sky Break’s story is pretty straightforward: when a team of scientists descends on the planet of Arcania looking for a cure to battle a great disease, a devastating storm annihilates them. Only one of the scientist survives: he (or is it a she?), must fight the local robofauna (yeah, i’m keeping this term), gather herbs that will help with the research, find and repair a ship and get out of this dangerous biome.

Sky Break is one of these games that you run around and simply shoot at stuff, with no complex combat mechanisms, no cover, dodging and tactics. All you have to do is run around and explore the map, gather resources for crafting and destroy the various mechbeasts that stand on your way. You can even hack up to four of them to have them follow you as upgradeable pets that fight for you. After 4 or 5 hours of gaming, I realised that Sky Break was eerily reminiscent of a very particular batch of the first so-called ‘action-adventures’. This is meant in an endearing way, not a demeaning one, to refer to games where ‘you don’t just shoot like in an FPS, but also do other stuff.’

Although you might struggle for ammunition in the beginning, when you purchase some of the basic upgrades for your character (improved damage, enlarged inventory space), it’s not a ‘survival game’ any more. The only real challenge is the storm mechanic, a timed event covering the world in devastating waves of electricity, which can be stopped by weather-control-points scattered on the map. As a matter of fact, half-way through the game and once you have completed a 4-pet army, unlocked your spaceship for faster map-exploring and purchased some combat upgrades, you can pretty much rush to the end.

So Sky Break was clearly intended for a fun, easy game of exploration (along with a few other bonuses like crafting and the pet system) and it delivered. But, was there room for improvement? Most certainly. Crafting recipes are limited and linear, enemy variety is extremely limited (two or three species for each of the four islands), while content-wise, the campaign is 8 to 10 hours long with no replayability or extra modes. Furthermore,  Sky Break could have benefited from some extra polish, as there are several minor bugs and peculiarities like misplaced resources in the world’s architecture and weird AI pathfinding. Nevertheless, Sky Break costs 14.9 EUR and if you really want to command a small army of mechanic owls, bears, ostriches and tigers, you don’t have many options.