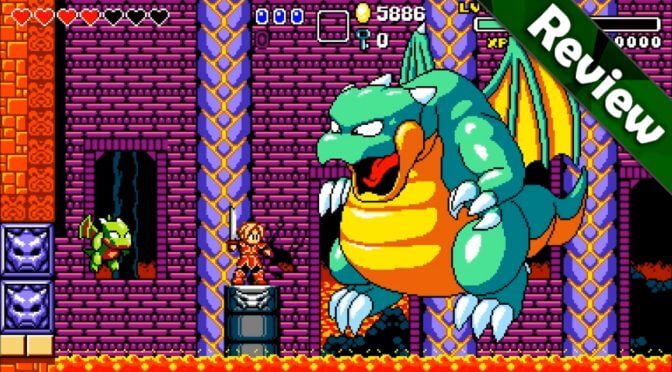 Since the glory days at the pinnacle of 16-bit,  it’s safe to say that for many, the love for this familiar style has not yet withered. With an entire generation riding the nostalgic wave of the 80’s and 90’s, there’s still no shortage of 2D side-scrolling adventures being pumped out, and it can prove to be a challenge digging up the gems hidden among them. With its deeply satisfying combat, beautiful 16 bit art, and a world full of secrets that is satisfying to explore, Aggelos is a modern example of such a gem.

The quest our protagonist embarks on is not dissimilar to one we’ve seen a time or two before: bad man has a bad agenda, a Kingdom in peril, the King calls upon our hero to save the day, you know the drill. From there you will begin your quest to collect all the elements and fight the bad guy. That’s pretty much the rundown, and Aggelos doesn’t put a whole lot of effort into building up the story. Once you’ve received your orders at the beginning, you won’t see much pertaining to it except the occasional bits of forgettable dialogue from there on out.

Luckily, Aggelos doesn’t rely on its story as the focal point of the game.  As you progress and your character gains new abilities and health quantity, you’ll start to see and feel more of what makes this game special. With every combat ability and elemental skill gained, the methods by which you can dispatch enemies grows.

Make no mistake, this is no button masher. Aggelos requires a perfect blend of skillful timing and a mastery of attack combinations to ensure execution of both simple tasks, and combat. It does have controller support, and I was able to use my generic brand SNES style USB controller perfectly to go with the already retro feel. Keyboard controls are of course available, but a D-pad is recommended for smoother control.

The world layout and progression is definitely metroidvania at its heart, and this can at times result in some of the games most frustrating moments. The game world becomes relatively small once you’ve finally started memorizing bits of it, contrast to the beginning when it still feels like a massive labyrinth. But with every new skill or ability you acquire, it’s easy to drive yourself mad trying to find the inconspicuous location where you can utilize said new ability to access a new area or secret.

In my opinion, it could have benefited greatly from  a basic area mini-map that only reveals once discovered, even if it only showed the shape of the rooms. The frustration mounts easily as you have to re-trace your steps, looking for the one little detail that may have been overlooked, in a room you’ve checked a half a dozen times already.

For the main objectives there is an NPC at the main castle that serves as a guide for you when you’re lost. It can be a nuisance having to head there every time you need a reminder, opposed to just having a quest journal in the menu.  And don’t expect any handouts in the form of spelling it out for you, she will usually provide you with a vague hint or area, but that’s enough to get you pointed in the right direction.

Aggelos is also full of surprises and achievements unrelated to the main quest. From near impossible challenges that grant you special attacks, to finding each secret heart container, there are plenty of secrets to discover that will leave the completionists among us satisfied.

The artwork and sound in Aggelos is exceptional. In this beautifully rendered 16-bit world, it’s easy to feel relaxed by its cutesy charm, even as you’re being attacked by hell spawn. The music is catchy, and goes perfectly with the environments each melody is attached to. Even as I type this I still have the tunes stuck in my head! It does however become quite repetitious and lacking in variety after playing for a few hours, but this is hardly a notable gripe, as it does its job well blending with the background like it should.

Aggelos touts itself as an adventure RPG, but the RPG elements involved are lacking in depth. With each level your character achieves, you will gain an incremental increase in attack and armor, but that’s it. There is no skill point input or attributes to speak of, and only a small variety of weapon and armor choices.

The world can feel very empty of any dialogue, and through my journey I was hoping to have found the hustle and bustle of at least one ‘major’ city or metropolis, but I was left disappointed. The towns all have a  few buildings, and only a handful of NPC’s armed with a one-liner when engaged with.

Being lite on the traditional RPG features is forgivable, though, because most importantly over all else, because it is fun to play. It requires you to use each ability and skill in an intelligent, thoughtful way to continue progression. The game can provide quite the challenge, especially in the second half after more powerful foes populate the map, though most of the challenge does come in the form of memorizing enemy patterns. This isn’t necessarily a bad thing, as it still requires you to utilize a proper combination of skills to defeat your enemies, but some of them do become overly simplified once you’ve learned how they move and attack, boss fights included.

This game doesn’t allow much room for mistakes, either. Getting hit by enemies can really hurt, and your only health recovery is an herb that automatically recovers a portion of hearts upon health depletion, and one potion slot that requires you to pause the game and open the inventory for use.

My time spent in-game was fun and rewarding, and it stands out as a unique and memorable platformer experience. With its delightful 16-bit style, catchy music and engaging gameplay coupled with the excitement of discovery, it truly is like a blast from the past. Players can expect 15-20 hours out of it at least, and for those into the ultimate challenge there is a even a 100% no deaths completion achievement! Aggelos is a true to form 16-bit platformer I can recommend to anyone looking for a fun challenge, or to have that nostalgia itch scratched.

Kyle spent about 18 hours in-game with only a handful of unlocks remaining to 100% completion.