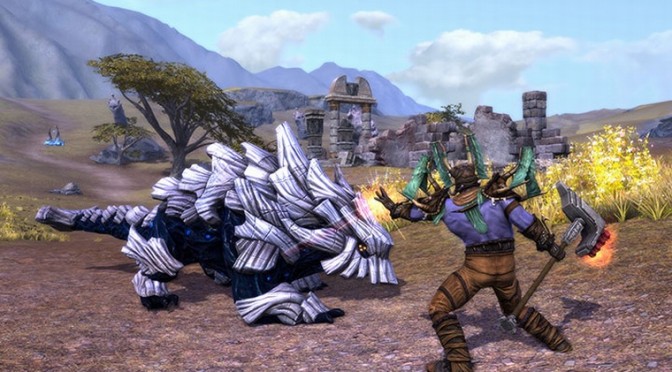 Trion Worlds announced today that Rift, its free-to-play fantasy MMORPG, receives its largest update since launch today, Into the Wilds. Update 3.4 features, for the first time in RIFT history, an all-new calling, the Primalist, and unlocks a massive, expanded world for exploration.

“Stolen away from Telara for decades and recovered through the magic of the Infinity Gate, the Planetouched Wilds have returned, its mysteries now open to all at last. News of the discovery has reached adventurers everywhere, enticing them to venture into the lost lands and experience the wonders within.”

Here are the key features of this update:

· Planetouched Wilds: Although cursed by karma, this new zone still retains great beauty and offers opportunity for adventure on an epic scale. Wander through the grasslands of the Cosmic Steppe, or visit the court in Shal Korva, always remembering that unexpected dangers lurk around every shadow!

· Primalist: Take a walk on the wild side as a Primalist, the brand-new Calling! Learn to harness your Fury and Cunning, and unleash your Primal Avatar on your foes. Available via The Wilds Pack or the Primalist Calling Pack in the RIFT Store.

· Rhaza’de Canyons: Below Shal Korva awaits a brand new dungeon, an immense network of canyons containing the ruins of fabled Rhaza’de. Somewhere deep within the steeply sloping walls, Teth has corrupted the mighty Ascension Machine, using it for fell purposes. Battle the minions of Teth to conquer the corruption and earn eternal glory!

· Assault on Bronze Tomb: Battle it out with the most dangerous enemies of all, other players, in this new Warfront Mode! Your team is challenged to either loot or protect as teams of mercenaries seek to control this tomb of the ancient.

· Much, Much More: RIFT 3.4: Into the Wilds also features a boost to crafting, including two all new Planar crafting varieties, and a number of UI improvements.

RIFT Update 3.4: Into the Wilds