Creative Assemply has recently registered the “Total War Saga: Troy” trademarks to the UK government website. Of course it doesn’t confirms that their next game will be definitely set on Troy, especially when we have zero information regarding their next game. What we do know is that they are working on the third and final installment of the Warhammer series. 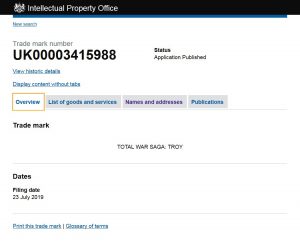 Now I don’t know about you guys but I didn’t really like The Thrones of Britannia. I also did not love The Three Kingdoms. I prefer games like Shogun and Medieval or even Rome (the first one). I want the balance between campaign and battle, the balance I’m used to and became familiar with.

The last Warhammer for me, is the best, gameplay wise. They did a tremendous job, especially with the last DLC Curse of the Vampire Coast, which adds more cool stuff.

I think the Total War Saga games are meant for more casual players, who don’t want to invest in a lengthy grand campaign to rule the world.