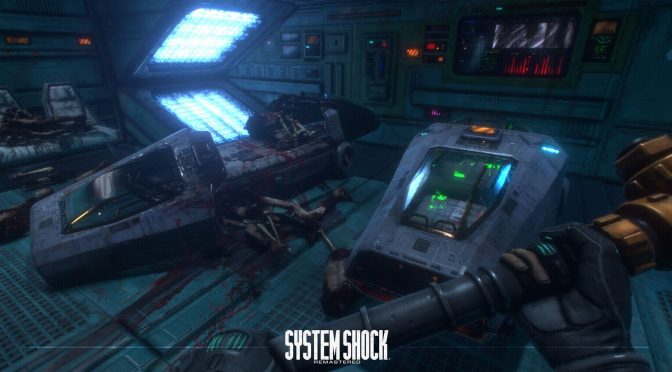 Neogaf’s member ‘MaxOfS2D’ (who is currently working on the remastered version of System Shock) has just revealed some new interesting information about it. According to MaxOfS2D, the demo lacked extensive optimizations as it was developed by a small team of 4 core people and one programmer. Moreover, MaxOfS2D claimed that an engine switch to Unreal Engine may actually happen.

As MaxOfS2D said about the performance of the System Shock demo:

“So far the game has been developed with a very small team of 4 core people, and only one programmer, so we did not have the manpower required to do more optimization work. We did however get the biggest perf issues out of the way.”

MaxOfS2D is aware of the performance issues are due to the culling system, something that will be improved and optimized in the final version of the game.

“Yep, most of our performance problems are coming from issues with the culling system (it’s a third-party solution). Our sole programmer has had to fight with it quite a bit, he hasn’t had the time to deliver the K.O. punch yet”

System Shock is currently powered by the Unity Engine, though the team may actually switch to the Unreal Engine in the future. As MaxOfS2D claimed:

“Right now the lack of performance is more due to the very small size of our team (four core people to make the demo), and not tied to our engine choice, but if we end up having to switch engines due to scalability or whatever other reasons, we’ll take the decision that makes the most sense for the project.”

“Currently we’re using Unity, but we’ve received a lot of feedback from our backers regarding Unreal. Whichever technology we ultimately decide to use, it will be based on the best tool for the job for making a great System Shock game for our backers. That’s really all I can say about it right now, but trust us, we’ll do things that make sense”

Last but not least, MaxOfS2D addressed the pixelated textures that appear in the demo. As you may have expected, this is an artistic choice (for what is worth, we really liked this choice).

“I do believe we can improve it further, the biggest challenge is that the texel scale needs to be more uniform — for example, right now, the first-person models are a lot more high-res than anything else, and they even have a bit of depth of field applied to them, which hides the lack of texture filtering.

A more uniform texel scale will definitely be one of the biggest challenges of this stylistic choice, IMHO.”