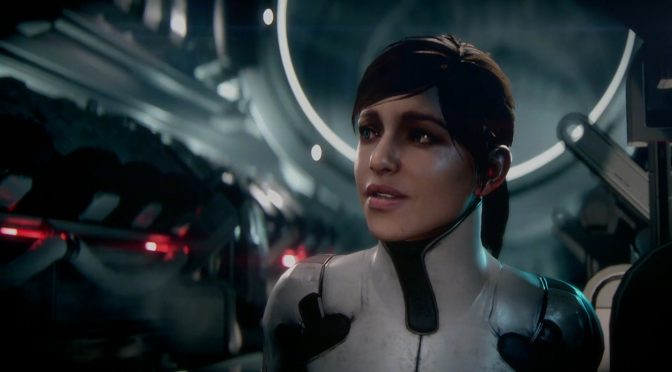 Mass Effect: Andromeda is a game that a lot of PC gamers are looking forward to. And while DICE did not reveal a proper trailer for it, we are pretty sure that you want to know more about it. Below you can find everything that has been unveiled during E3 2016 (via various interviews). Kudos to Reddit’s member ‘Audemus77‘ for collecting all this information!

EA Play Trailer
-The new ship is called the Tempest. It’s small enough to land on planets
-Asari, Salarians, Krogan etc are all in Andromeda
-The Mako has a boost feature
-Biotics are back
-You can switch shoulders during combat
-Facial animations are smoother/more detailed
-There is more than one Ark
-Before leaving, the Arks were located above Earth
-Passengers on the Ark have been kept in some kind of stasis during the journey. Female character is first to wake up

Mac Walters (YouTube Live at E3)
-Characters are a huge focus, Frostbite allows them to create more detailed characters
-The dialogue system will be familiar but they want to push the envelope with new mechanics
-There will be an ‘evolution’ of the morality system
-The protagonist’s name is Ryder
-The woman at the end of the EA Play video is a FemRyder
-The goal of this game is to move forward. There will be callbacks to the trilogy however
-Ryder has a family. This family ties into the storyline (Maybe siblings, parents etc)
-ME3 multiplayer was a surprising success but they understand that fans didn’t like how it tied into the single player, aims to improve this
-Development in the game is in the final stretch, they only want to show stuff that’s totally finished and polished
-The Mako is the only vehicle in the game

Polygon and IGN interviews with Mac Walters/Aaryn Flynn
-Mass Effect 3’s ending and your decisions won’t affect Andromeda
-Relationships and romances will be more realistic
-Friendships and romances will take into account character temperaments. Some may be harder to talk to.
-Romance won’t be limited to checking in a few times, then getting a romance scene.
-Mass Effect Andromeda is a story about becoming a hero
-The characters will be much younger and untested, drawing from themes of feeling out of depth or like an outcast
-Humanity are the aliens this time, it’s the story of a stranger in a strange land
-BioWare are aiming for a character that is more than just a typical space marine, someone who recognises the impact their presence is having
-Instead of your character already knowing a lot about the Galaxy like Shepard, you’re going to be discovering all of this stuff with them
-You won’t have the kind of support Shepard would have. You’re not exactly a Spectre this time
-The story of the game will be more personal this time, even though the scale is still grand
-The trilogy will act as a foundational background, but won’t be a focus. There will be explainations for new players on what Krogans are, what mass effect field are etc.
-The trilogy was about a cinematic, grand, space opera with a titular character. With Andromeda they want to move away from this
-Instead of saying “You are this person” it’s about saying “This is your role and this is the way you can play it”
-Andromeda will still be a human centric story, as it gives the player a foothold in the alien narrative
-In ME1, humans found themselves to be the underdogs in a larger galaxy, and this is ultimately a core theme of Mass Effect, not just the trilogy
-BioWare kept trying to solve the vehicle problem in the trilogy, but this time they’ve made it a core focus and tried to fix it early in development
-The online component will have no impact on the main story this time. There will be more positive ties between the singleplayer and multiplayer
-The core elements of branching dialogue, relationship building, exploration etc will remain intact
-Andromeda will feel like you’re playing Mass Effect for the first time, as the setting/characters are new and unfamiliar, yet nostalgic to returning fans

Yanick Roy (Studio Director)
-RPG elements are of course still there, allowing the player to control the story their way
-BioWare aren’t worried about moving on from Shepard, they believe that as long as all the core elements of Mass Effect are there, people will play it
-There will be companions with ‘loyalty’ missions and new ways to get to know them
-The multiplayer will be similar to ME3’s but with more freedom, dynamic gameplay and ‘chaos’
-There will be more customisation than we’ve seen before. We can “own” our environments
-Andromeda is their biggest game ever. Exploration is a major factor, similar to what they tried to achieve in ME1
-Planets will have essentially one biome, inspired by planets from things like Star Wars
-There will be different ways to communicate with the races of Andromeda. Diplomacy, aggressiveness, combat etc
-The order in which you do quests/talk to people may also influence opinion of you and humanity
-We will be able to choose male/female, but they want to go a little bit further with this. More details to come soon
-The female Ryder isn’t exactly the default face. There is a bit of a twist this time around but they can’t say more yet
-The protagonist’s role will be vast, their goal is to find a new home for humanity and the other races accompanying them, requiring a character of many qualities
-There will be references to the trilogy, but not so much as to flood new players with information
-The way the translators will understand the languages of the Andromeda species will be explained
Aaryn Flynn (PlayStation Access and Inside Playstation)
-The trip to Andromeda has taken a really really long time (hundereds of years)
-The game draws parallels to today’s space exploration advancements/themes
-The N7 character has nothing to do with Shepard
-New species. Some old, some new, some completely mysterious
-Choices will affect the species you encounter
-Planetary exploration is essentially the same mechanic as ME1, but much MUCH bigger/better with more freedom
-There’s much more to the Tempest than meets the eye
-The ‘Ark’ is a huge part of the story, not just where Ryder wakes up
-Main character will be human, you can choose to play as a male/female Ryder
-There is a sense of continuity in the Mass Effect universe, despite starting fresh in a new Galaxy
-Mass Effect Andromeda is story/characters first, then with a large focus on seamless loading, exploration
-Frostbite has forced them to rebuild everything from the ground up, it’s a clean slate in more ways than one
-Mass Effect VR is a possibility

EDIT: New Info (Various Sources such as Twitter and news websites) -Same-Sex romances are still there
-Info about the collectors edition is coming this fall
-As the game runs Frostbite, the PC hardware requirements will be similar to that of Battlefront and Inquisition
-More news may be coming in weeks instead of months.
-Codex entries will be detailed and in-depth as usual