Intel’s new CPUs will be released in a few days and the first gaming benchmarks for its new Intel Core i9-7900X CPU have surfaced. Bit-Tech and Hexus have tested Deus Ex: Mankind Divided, Ashes of the Singularity, Hitman, 3D Mark and Total War: WARHAMMER.

Both Bit-Tech and Hexus used an NVIDIA GeForce 1080 graphics card, though we’d love to see some low-resolution 720p tests (in order to avoid any possible GPU limitation).

The reason we’re saying this is that Bit-Tech’s benchmarks appear to be GPU-limited. So yes, while these first benchmarks can give us an idea of how the Intel Core i9-7900X performs, they do not give us the real difference between this CPU and its competitors. 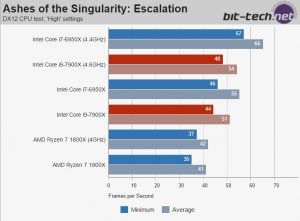 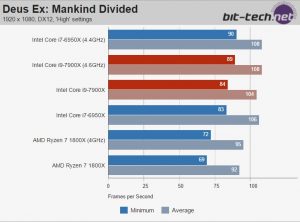 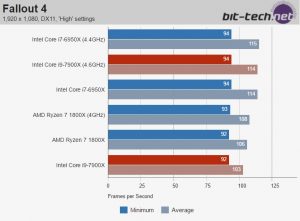 As said, Hexus tested Deus Ex: Mankind Divided, Hitman and Total War: WARHAMMER. The first game was obviously GPU limited, however there were some interesting results with the latter two. In Hitman, the Intel Core i9-7900X was faster by almost 10fps than the Intel Core i7-6950X. In Total War: WARHAMMER, there was unexplained stuttering, resulting in underwhelming results. 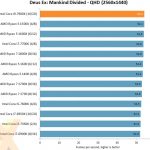 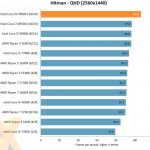 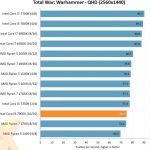 So, the first gaming benchmarks for the Intel Core i7-6950X are not that amazing, particularly due to the fact that both Bit-Tech and Hexus: a) did not use a lot of games and b) they were GPU limited in most of them.

Here is hoping that all gaming benchmarks from other sources will either be at low resolutions (with max settings) or with 2XGTX1080Ti GPUs (that is of course if the games tested support SLI) in order to avoid any possible GPU bottleneck.