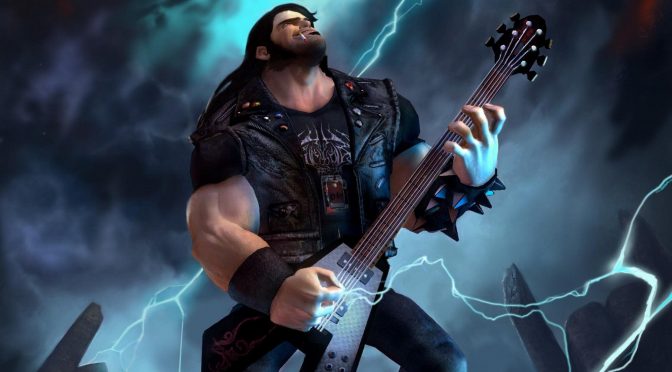 Metal fans, here is something for you today. The Humble Bundle is currently giving away free copies of Double Fine’s Brutal Legend. Therefore, for the next 48 hours, PC gamers can acquire their free copies by visiting Humble Bundle.

Brutal Legend is an action-adventure that marries visceral action combat with open-world freedom. The game is set in a universe somewhere between Lord of the Rings and Spinal Tap, and is a fresh take on the action/driving genre. Brutal Legend features Jack Black as Eddie Riggs and cameos by some of the biggest names in metal music.

The PC version of Brutal Legend also features both the Hammer of Infinite Fate and Tears of the Hextadon multiplayer map packs. Moreover, it features a 4v4 “skirmish” multiplayer mode. According to its description, the MP marries action combat with a strategic unit-control mechanic.

Brutal Legend gives players the freedom to walk, drive, or fly anywhere in a fully streaming open world. Furthermore, the game’s art style is inspired by some of the most iconic and hilariously rad metal album covers ever created. Also, the game packs 108 tracks from 75 different bands representing every sub-genre of metal.

Do note that Brutal Legend is not only an action adventure, but also a strategy game. As such, its combat is a combination of classic action slasher and real time strategy mechanics. Melee and ranged combat come from your double-sided broadaxe and demon-slaying, pyrotechnic-creating guitar. Moreover, it features a guitar solo mechanic that can summon objects, buff your teammates, or cripple your opponents.

Brutal Legend came out in 2013 on the PC, and currently has Very Positive reviews on Steam.

Those interested can acquire their free copies by visiting Humble Bundle.